Hi, ladies:
Well, after the negative subject matter in my last post, I wanted to steer things in a more positive direction. On the topic of my last post, though, thank you so much for all of the kind feedback – I know Anna really appreciated it, and so did I.

Speaking of Anna, though, I’m sure you’ve all seen the beautiful bridesmaid dress she hand made for Stephenie Meyer Day this year.

Isn’t it stunning? Well, I thought anyone who’s thinking of making it themselves would want to know how she did it, so Anna was kind enough to sit down and answer a few of my questions.

What inspired you to want to make Alice’s dress yourself?
I had planned on it anyway, just for photoshoot purposes, but then I found I was being Alice Cullen for Stephenie Meyer Day and knew it HAD to be done. One way or another, this dress was going to be made.

What resources did you use to prepare your design? Did you stray at all from Alice’s design?
I printed out every decent reference image I could find of her dress from the front, side and back. I watched the wedding scene and reception countless times to see how the dress moved and how the beads were angled.
I did stray from the design a bit and I wish I didn’t, because it feels like I put more work into it. The main thing I strayed from was that I didn’t incorporate sequins and seed beads into the skirt portion of the dress. I didn’t have the time nor the resources to put those with the dress. Lilac sequins are not easy to come by.

What kinds of materials did you use? Where did you find them?
The base layer was a dark purple sparkly satin-like material from JoAnn fabrics. The overlay is purple georgette chiffon from Denver Fabrics (one of my favorite fabric shops to buy any chiffon). The denser the fabric, the easier it was to sew the beads on. The beads were purchased from Fire Mountain Gems. They are lilac bugle beads. The feathers were purchased from an Etsy seller.

Here’s the one everyone wants to know: about how much did making this dress cost? Where could you have cut or added costs?
All items for the dress were fairy inexpensive, wig and shoes not included. Overall, the materials cost around $80. I know; it’s not much and seems like it should have cost so much more, but I didn’t chose really expensive materials. I chose ones based on their feel and color to get as close as possible. They just happened to have a small price tag. If I wanted to be more accurate and buy sequins and seed beads the price would have gone up. I have no problems paying a little more for materials to make a better costume.

Can you walk us through the process of making it?
Overall, it wasn’t quite complicated. Me being me and a stubborn coslayer, I didn’t use a pattern. I hate patterns. I just wing it and, somehow, it turned out well on the first try.

I made a base dress. Just something simple. Then I used the base as a pattern for the chiffon overlay, except using frayed pieces to make the geometric outlines like they use for the dress in the film. It was a little trial and error on that part, but I made it to where they look seamless with the chiffon, rather than sewing on top of anything.

The beading was, by far, the longest part of working on the dress. I based it off what little I could see from the reception and promo photos and screencaps I made and found. I didn’t follow the pattern 100%, but I followed it enough to where it looked the part. I probably put a bit more work into it than I should have, so I’d recommend followed her bead pattern exactly to avoid extra work.

Fabric chalk is a staple! It helped me align where the beading should start and end. Once one layer was beaded it made the rest easier. A simple template is all you need. I also didn’t use an embroidery hoop, which people thought I was crazy for not using. I free-handed all my beading. I didn’t see a problem with it and I think it turned out really well and got the outcome I wanted. There really isn’t much to say about the beading process except that it’s tiring, tedious, and long. I would rather have hand ruffled 30 more yards of fabric than beaded as much as I did. There are almost 14,000 beads on this dress! When John Henson (owner of the largest Twilight clothing collection and costume designer for The Hillywood Show) told me “you can stop beading,” my heart stopped for a moment. I was so relieved. Just take your time with it and don’t freak out. Trust me, it’ll be worth it. 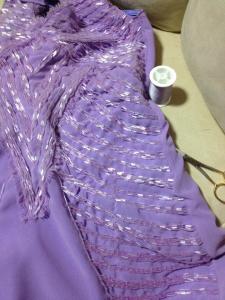 The feathers were my biggest problem. I couldn’t get them to look right and sew them on correctly. Thankfully, my Rosalie (Tiffany of Dismaldreary Cosplay) stayed up horribly late with me to assist with the feathers and help finish the dress. I would recommend putting the feathers on by means of a sewing machine and not hand sewing. I am pretty sure I molted all over Leppell’s Flowers in Forks.

What do you love about the finished product?
I love the fit. I love how the beads sparkle from the lights and camera flashes. It’s so much fun to wear.

What would you change about it?
I’d redo the feathers and add more beads to the back of the dress. Also, I would realign a lot of beads, because, to me, they look crooked and offset.

Give us some insider info! How does it feel to actually wear it?
Heavy. It’s a few pounds once the beads were put on. It’s not uncomfortable, though. I’ve worn a hoop skirt for 12 hours straight and this was a breeze compared to that. It feels fun, sexy, but Alice classy. Everyone touching the beads at Stephenie Meyer Day was hilarious. And the look on their faces when they found out I made it was worth the time I put into it. 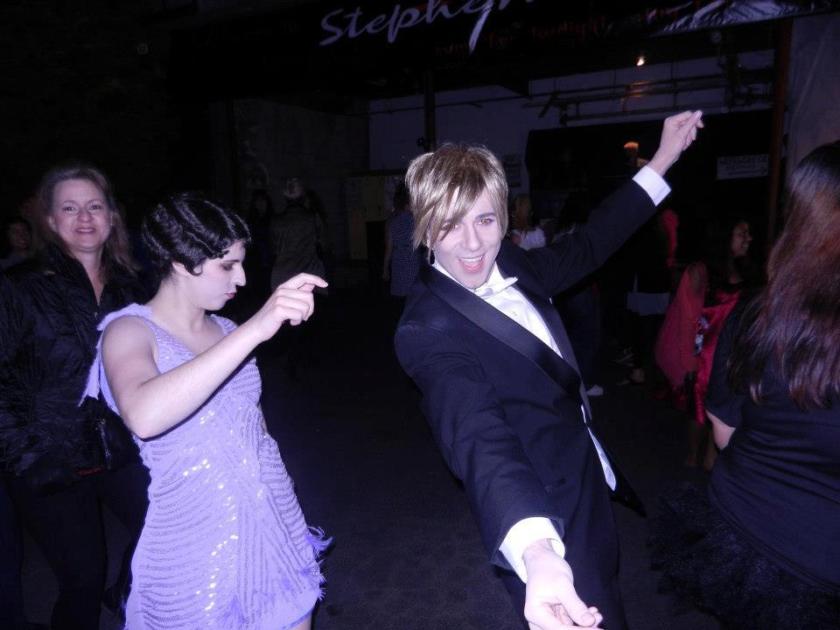 A lot of cosplayers pride themselves on being perfectionists. Would you make this dress again? Explain.
I would. Given more time and all the knowledge I have now, I would remake the dress and make it more accurate. I am a perfectionist with my cosplays. I’ve remake a skirt for a cosplay three times, because I was unhappy every time I wore it.

Do you have any advice for Alice costumers who are thinking of tackling this project?
TAKE YOUR TIME!! Start it really early and don’t give yourself an unreasonable completion date. Beading isn’t something you can easily pick up. I had to tear apart and rebead so many lines. Don’t let it get you down. I had many moments of wanting to give up on the dress, but I didn’t. I, literally, put blood, sweat and tears into this dress. So many tears. This was the most challenging dress I have ever made. Even moreso than my Firefly “Shindig” Kaylee dress. But, don’t give up and don’t rush. Take it one section at a time. And feel free to put your own style into it. Mine is by no means perfect, but it’s mine. You can tell it’s mine. Bring your dress to life and be positive throughout the process. You will love and hate your dress and there’s nothing wrong with that, because it’ll be yours.

Yep, it was harder to make than this.

Thanks for answering my questions, Anna! Hopefully that was a huge help for anyone who wants to attempt this dress.