When I first started collecting Alice’s clothing, Twilight fans had access to a resource called Coolspotters.com, a user-driven website that allowed fans to share information about the clothing worn by their favorite celebrities and fictional characters. It was a haven for Twilight fans, especially if you collected Bella or Alice’s clothing. Each character had hundreds of items identified, including clothing, jewelry and shoes, which made it easier to build your own screen accurate wardrobe.

I sometimes feel sad for fans who are newer to the cosplay or collecting game, because Coolspotters went belly-up in 2019, and all of that compiled knowledge went with it. Without a repository like that, it makes it a lot harder for people to collect in the same way. Sure, there are Facebook groups and individual sources of knowledge you can draw from – like me – but we don’t know everything, and it goes without saying that you can get a lot more done when hundreds of people are contributing to the same cause: spotting Twilight clothing!

If you go back far enough on my website, you can find a ton of posts about individual Alice pieces that were identified over the years, but not everyone has time for that. So, in celebration of Midnight Sun being released on August 4, I thought I’d compile some of Alice’s most iconic looks from the first film and share the brand information we have about each outfit.

Blouse: Like much of what Alice wears (and Bella), this pintuck white blouse was by Joie! After eluding collectors for more than a decade, it was finally spotted by @thetwilightcloset.

Shoes: You can’t see them in this photo, but Alice wears the Cruz Pewter Flats by Sam Edelman in this scene – and several more times throughout Twilight!

Dress: Arguably Alice’s most iconic piece is the Oleada Dress by Diane von Furstenberg. It’s instantly recognizable, even to non-Twilight fans, and can still be found on eBay and Poshmark to this day!

Cardigan: Alice’s black cardigan is by a Nordstrom brand called Bel Niente, although it’s very rare and has never been seen outside the Twilight auction. I found a suitable alternative on eBay by searching “black knit bolero,” and some talented crochet artists have been known to make this by hand.

Leggings: Literally any cropped black leggings will do. Not everything needs to be screen accurate! Mine are from Garage Clothing.

Jewelry: A lot of Alice’s jewelry was never identified. In this scene, she wore silver bangles stacked on each arm and silver heart filigree earrings. I was able to find alternatives to the earrings on Etsy and my own versions of the bangles at Ardene.

Shoes: Alice re-wore her Cruz Pewter Flats by Sam Edelman for this scene.

Not pictured: A thin, brown, wooden headband that was never identified. It features an almost snake skin pattern. I found an alternate on eBay.

We don’t know a ton about this outfit, which Alice wore on their field trip to the green house. In fact, only one thing has been identified: Alice’s Juicy Couture puffer coat. It’s a blue, down-filled puffer that comes with a detachable fur hood, and Alice wears the jacket without it. In some lighting – or with fading over time – this jacket may appear purple in person. You can still find it on eBay, although you’re more likely to find it in its alternate colors: black, maroon or white.

Some may not consider this one of Alice’s most iconic pieces, but I do. It gets cold in Forks and it’s nice to have a warm coat!

Hat: Much of Alice’s baseball uniform was handmade or customized by the costume department, including her hat. I made my own by finding a dark blue hat with no snap closure on eBay, because Alice’s hat is fitted and not adjustable. I added a red “smartie” to the top of the hat, which Alice’s also has, and glued on my own, similar-looking red “C,” which I found at Michael’s. I’m not crafty at all, but even I could do it!

Vest: This was also either custom made or altered. I had a friend make mine. If you’d like to make or commission your own, check out these high-res reference shots from the official Twilight Saga auction for more details.

Shirt: Under the vest, Alice is wearing a black and grey Cold Gear compression top by Under Armour.

Pants: Alice wears standard, cropped black baseball pants, which you can find on eBay or at athletic stores.

“Rip him apart and burn the pieces!”

Jacket: When it came to ripping James’ head off, Alice’s look was very “vengeance-chic.” Her jacket was Converse One Star in slate grey, although it looks blue under certain lighting.

Jeans: These jeans were recently spotted in partnership with @thetwilightcloset! They’re by Paige in the Hollywood Hills bootcut style, but any dark blue denim jeans will do. Unless they’re super recognizable, I tend not to stress over screen accurate leggings or jeans.

Belt: You can’t see it here, but Alice is wearing a black belt by American Eagle with her jeans, which is used as a tourniquet in the film. The belt has a decorative silver buckle. As with the jeans, any belt you’re comfortable with will do, as it isn’t visible with this outfit.

Shoes: Alice wears a pair of vintage velvet Nike hi-tops with this outfit called the Nike Women’s Sixton Med Premium Brown 316407-271. The official Twilight Saga auction describes them as “made of a brown and violet velvet fabric with a Victorian pattern.” Because they’re vintage, these shoes are pretty rare – try searching “Nike Sixton” on Poshmark, or even “Nike velvet shoe,” but be patient. They only pop up once in a blue moon. 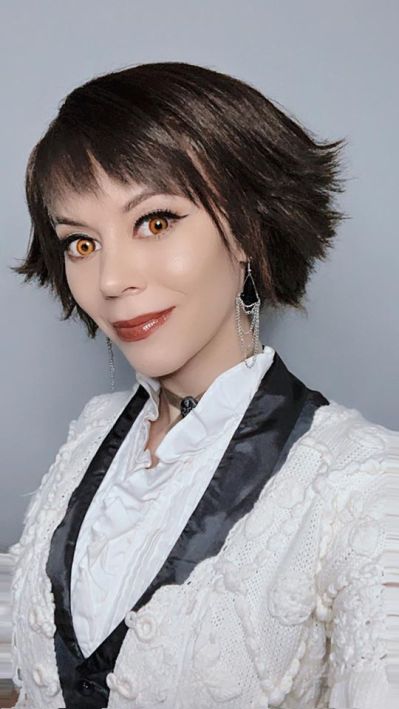 Of course, no post would be complete without a photo of me doing my Alice thing, right? 😉 I don’t wear this outfit very often, so I thought I’d show it off! The earrings worn in this photo were made years ago by Bella Bejeweled, which may or may not still be accepting orders.

Did I miss anything you were looking for? I’ve posted about Alice’s Anthropologie Periwinkle Sparrow cardigan and Coco short sleeve blazer in the past, which were both worn in quick cafeteria shots while Edward is skipping school. But, given how quickly each was featured in the film, I couldn’t consider either of them among Alice’s most recognizable looks.

Let me know what you think Alice’s most iconic Twilight outfit is in the comments!